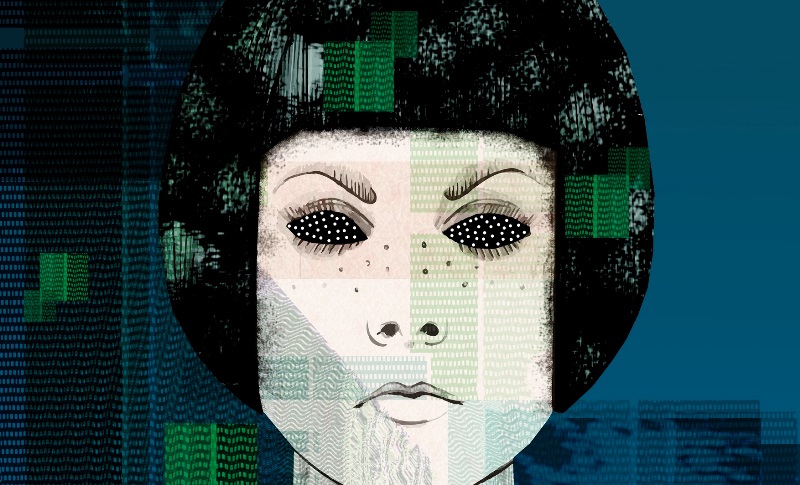 Monsters of the Machine is a contemporary take on Mary Shelley’s Frankenstein and asks us to reconsider her warning, that scientific imagining and all technologies have unintended and dramatic consequences for the world. It also invites us to ask the same about the arts and human imagination. Shelley’s classic, gothic horror and science fiction novel, has inspired millions since it was written 200 years ago in 1816, and then published anonymously in London in 1818. It offers a lens through which to look at the practices of arts and sciences today and how they shape society’s relationship with technology.
Dr. Frankenstein plays the role of the Promethean scientist, a creative genius, and also a narcissist tangled up in his own individual desires, exploiting others in an irresponsible and abusive drive to control nature. However, who is the real monster? Dr. Frankenstein or the poor wretched mutant he brought to life? Are we Dr. Frankenstein, or the suffering mutant, or both? This question posed by the exhibition considers the roles of our arts and science traditions and examines these issues as part of everyday life; as they are played out in the anthropocene, and climate change, gender politics, ethics, governance, surveillance, posthumanism, transhumanism, hacking, biohacking, colonialism, neoliberalism, biopolitics and accelerationism.
In this exhibition, visitors can experience artworks in which the human genome is used as the basis for a poetry machine for a self-assembling video montage spanning the thirteen years - a memorial work and an algorithmic visualisation for an historic scientific landmark. 3d printed avatars, representing distorted bodies in pain, in relation to virtual worlds, where there's no geography and the result is the crack / wound, everywhere and nowhere. Visitors participate in a software-driven installation, a performative social neuroscience experiment to discover our shared psychological biases. A surreal video installation shows us a dystopian blend of "reality" out in the remote Australian desert with traditional ghost stories and dreamtime stories, mixed with science fiction. The Sahara Desert is remapped by a custom bot in an algorithmically scripted performance, traversing the data-scape of Google Maps and filling a Tumblr blog and its data-centres. Artists take our bio-matter and the inconceivable quantities of data which we generate in our daily lives as materials with an inherent recombinant intelligence and the power to generate (without the intervention of human will) the narratives of human destiny and more. Do we inhabit our own bodies anymore, or do we share our body materials out for others to measure, reshape and construct, data-scrape and manage remotely. Arthur Kroker in Body Drift: Butler, Hayles, Haraway says that, "we no longer inhabit a body in any meaningful sense of the term but rather occupy a multiplicity of bodies – imaginary, sexualized, disciplined, gendered, laboring technologically augmented bodies".
Artists and scientists work with the same tools, frameworks and archetypes. There are crossovers, it’s no surprise that we find the boundaries of imaginative fantasy and objective reality breaking down. Take for instance, the jellyfish invasions around nuclear reactors in Japan, Israel, Sweden, and the Scottish plant in Torness. The natural world is writing its own science fiction into a new reality, with vivid images and outlandish outcomes. Right now, the classic techno-utopian dream of computers liberating us all and providing the tools that will underpin global democratisation, seem a long way off and even somewhat sterile. Since the news stories broke of mass surveillance of Internet users by NSA and Prism, we’ve experienced new formulations of mutual surveillance and manipulation everyday. So now we stand at a precipice, what choice do we have but to jump into this sea of dysfunctional dystopias, and to directly observe for ourselves, what we have become and what we will be, the Monsters of the Machine.