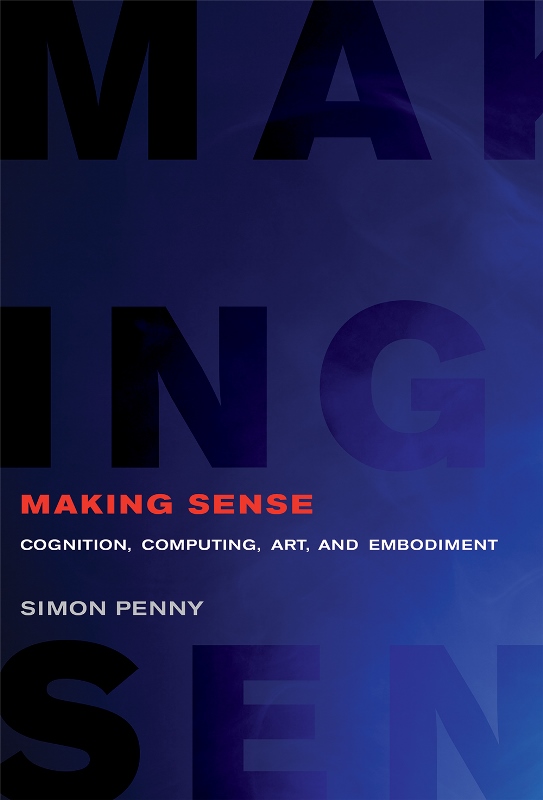 In Making Sense, Simon Penny proposes that internalist conceptions of cognition have minimal purchase on embodied cognitive practices. Much of the cognition involved in arts practices remains invisible under such a paradigm. Penny argues that the mind-body dualism of Western humanist philosophy is inadequate for addressing performative practices. Ideas of cognition as embodied and embedded provide a basis for the development of new ways of speaking about the embodied and situated intelligences of the arts. Penny argues this perspective is particularly relevant to media arts practices.
Penny takes a radically interdisciplinary approach, drawing on philosophy, biology, psychology, cognitive science, neuroscience, cybernetics, artificial intelligence, critical theory, and other fields. He argues that computationalist cognitive rhetoric, with its assumption of mind-body (and software-hardware) dualism, cannot account for the quintessentially performative qualities of arts practices. He reviews post-cognitivist paradigms including situated, distributed, embodied, and enactive, and relates these to discussions of arts and cultural practices in general.
Penny emphasizes the way real time computing facilitates new modalities of dynamical, generative and interactive arts practices. He proposes that conventional aesthetics (of the plastic arts) cannot address these new forms and argues for a new "performative aesthetics". Viewing these practices from embodied, enactive, and situated perspectives allows us to recognize the embodied and performative qualities of the "intelligences of the arts".