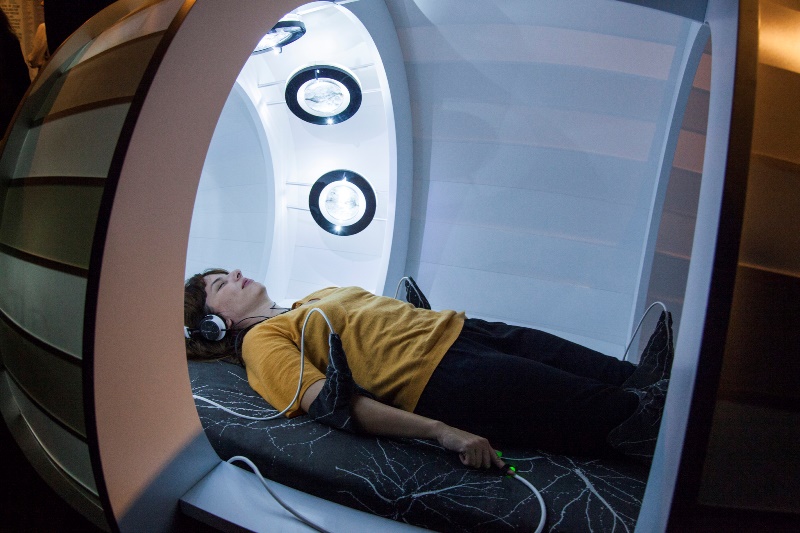 This is the first comprehensive exhibition that Ars Electronica Linz has ever staged to showcase artistic positions on this very timely topic. HYBRIDS, designed in collaboration with the Onassis Cultural Centre-Athens, features 16 extraordinary manifestations of artistic considerations, positions and processes, artifacts and works, workshops and presentations—hybrids one and all. Hybrid also applies to the exhibition setting, an attempt to create a space that facilitates experiencing precisely these phenomena, one that effectively displays works, enables working processes and permits participation, and thereby fosters a joint endeavor to gain a better understanding of our world.
The Prix Ars Electronica, a competition staged annually by Ars Electronica Linz, has included a Hybrid category since 2007. (Since 2013 the Golden Nica in the HYBRID category is awarded on a biennial basis.) The backstory: Insinuation into the world of Digital Art of more and more computer-supported artistic methods and artifacts that were of such a processual nature and took such a significantly interdisciplinary approach entailing other genres such as performance, theater, music, film, architecture and, most significantly, fields of the natural sciences, and which constituted noteworthy achievements but evaded attribution to the extant Prix categories. In Hybrid, the accent is on merging different media and genres into new forms of artistic expression, on crossing the boundaries between art and research, on social and political commitment and activism, as well as on reconnoitering pop cultural realms.
When we speak of “hybrid” and “hybrid works” in conjunction with this exhibition, then we can generally describe what we mean in terms of interdisciplinarity and remix, that which is processual and simultaneous. More profound consideration of the works reveals three categories: Hybrid Realities focuses, first and foremost, on the simultaneity of systems; Mankind & Utopia investigates the nexus of art and science; and Hybrid remixed features the forms of social critique that emerge when art goes angling in foreign waters and hosts the odd meet & greet of elements that rarely get together for such encounters.
So, what does it mean if art enters into a liaison with other disciplines? When artists with no qualms about dealing with non-artists do things like scrutinize scientific experiments, delve into other markets, or even instructively run a faux con game on the home turf of the business world’s profiteers? What are the contents of our understanding of artistic “works” and their spaces? What does collaboration mean in this context and what influence does it have on authorship? Don’t these new approaches also necessitate new definitions and taxonomies, or even a new language, and ultimately a new way of looking at our world?

Linz. 2016 Ars Electronica Festival. RADICAL ATOMS and the alchemists of our time